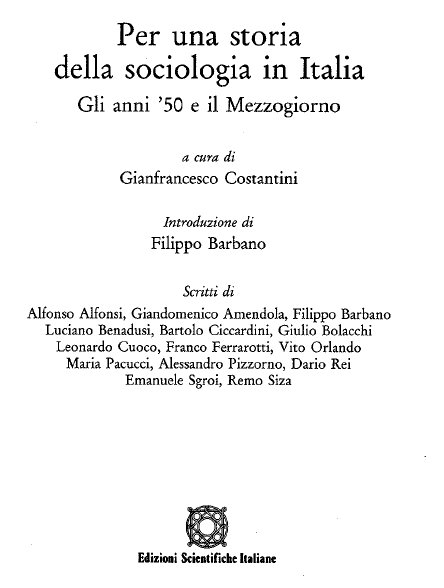 Economists can influence policy guidelines due to the logical-mathematical structure and their discipline seniority compared to the other social sciences; yet, they are unable to identify the variables that can lead to endogenous accumulation in undeveloped areas, confining themselves to hypotheses based on resource transfers from outside. The economic policy interventions based on these hypotheses have determined the localization of industrial activities disconnected from the pre-existing economic context and, far from eliminating it, lead instead to a heightening of the backward economic structure’s dependency on the continuous resource flow from outside the area.

Therefore, to solve the problem of the transition from underdevelopment to development, it is necessary to overcome the theoretical shortcomings of the models formulated so far and advance a scientific perspective that integrates the economic and sociological components. The economist can look at the economic equilibria, flag situations of imbalance, and provide corrective measures to eliminate them. The sociologist should provide the politician with equally valuable support on social equilibria and cultural dynamics in a pluralistic society.

The text refers to “underdeveloped areas” or “developing areas.” It would be better to speak of “areas not conforming to a predetermined development standard.” The term “underdevelopment,” at the present state of knowledge, should be indeed considered as a two-argument (or multi-argument) predicate, according to the postulate of cultural relativism.

The issues addressed in the text show how the integration between economics and sociology (or, better, the integration between economics and behavior science) is fundamental to understanding the problems of “underdevelopment” and current globalization. The socio-economic problems we are experiencing, in a European and global dimension, can be explained only from this perspective.

The volume collects the contributions to the fifth session of the permanent Forum on the Southern question, “Sociology and development of the South in the 1950s”, held in Bari on 19 and 20 July 1990 and promoted by the Aldo Moro Academy of Historical Studies.